Law and Judicial Dialogue on the Return of Irregular Migrants from the European Union, by  Madalina Moraru, Galina Cornelisse, Philippe De Bruycker 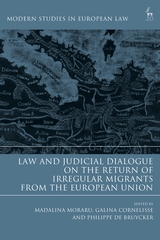 This volume examines the implementation of the Return Directive from the perspective of judicial dialogue. While the role of judges has been widely addressed in European asylum law and EU law more generally, their role in EU return policy has hitherto remained under explored. This volume addresses the interaction and dialogue between domestic judiciaries and European courts in the implementation of European return policy. The book brings together leading authors from various backgrounds, including legal scholars, judges and practitioners. This allows the collection to offer theoretical and practical perspectives on important questions regarding the regulation of irregular migration in Europe, such as: what constitutes inadequate implementation of the Directive and under which conditions can judicial dialogue solve it? How can judges ensure that the right balance is struck between effective return procedures and fundamental rights? Why do we see different patterns of judicial dialogue in the Member States when it comes to particular questions of return policy, for example regarding the use of detention? These questions are more timely than ever given the shifting public discourse on immigration and the growing political backlash against immigration courts. This book will be essential reading for all scholars and practitioners in the fields of immigration law and policy, EU law and public law.

From Tampere 20 to Tampere 2.0: Towards a new European consensus on migration, by Philippe De Bruycker, Marie De Somer and Jean-Louis De Brouwer

To mark the 20th anniversary of the 1999 Tampere European Council conclusions, the Odysseus Academic Network together with European Policy Centre, European Migration Network Finland and the Friedrich Naumann Foundation, embarked on a year-long project to assess the legacy of the Tampere conclusions and how they continue to shape and inspire EU policymaking today. Centred on four pillars – partnerships with countries of origin, a common European asylum system, fair treatment of third-country nationals and the management of migration flows -, these conclusions provided guidelines and sketched out principles that remain relevant two decades later.
The project included a series of expert roundtables, culminating in the Tampere 2.0 conference held in Helsinki in October 2019, in the margins of the Finnish Council Presidency. The ideas and suggestions discussed at these events were brought together in this publication.
Based on the current state of the EU’s migration and asylum policies and the lessons learned from the 2015-2016 crisis, the book argues that solidarity and the implementation of common policies are the two building blocks for a new European consensus on migration. It puts forward a set of concrete ideas on a new institutional and financial framework for migration policies, on legal migration, the common European asylum system, Schengen, integration, border control, return and readmission, the Global Approach and Partnership Framework, and development.

Searching for solidarity in the EU asylum and border policies, Constitutional and operational dimensions, by Daniel Thym and Lilian Tsourdi

As an outcome of the 2016 Annual Policy Conference of the Odysseus Academic Network “Searching for Solidarity in EU Asylum and Border Policies”, a special issue of the Maastricht Journal of European and Comparative Law has been edited by Daniel Thym and Lilian Tsourdi. This special issue is available here.

Solidarity was once at the core of the European integration process. While originally intended to facilitate further integration, solidarity, in recent years, has often been associated with the intention of safeguarding existing policies. This article attempts to untangle this polysemous concept. It discusses the constitutional significance of solidarity, ultimately distinguishing four discernible dimensions in the EU context: transnational solidarity, inter-state solidarity, solidarity between a particular group 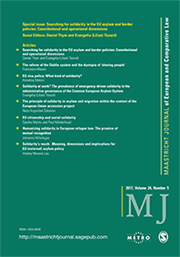 of individuals and, finally, the institutional dimension. It unpacks the interaction between solidarity, loyalty and mutual trust, ascertaining them as interlocking principles. We focus on solidarity in the Area of Freedom, Security and Justice, revealing it to have legal effects which require compensatory action to support the application of supranational rules. Nonetheless, the principle can be realized in different ways, and it is far from certain whether the EU institutions are able to muster the political clout and the political legitimacy necessary to overcome divergences of opinion and perception. Against this backdrop, we sketch what EU institutions have undertaken to operationalize the principle in the ambit of EU asylum and border control policies to respond to the refugee policy crisis. The contributions to this special issue delve more deeply into the different aspects of this central theme.

A special issue of the Refugee Survey Quarterly, edited by Philippe De Bruycker and Lilian Tsourdi, is available here.

Articles in this issue examine the challenge of asylum detention to refugee protection employing various research methodologies and concentrating on legislative developments, jurisprudence and practice in different national and regional levels: North America, EU, Council of Europe and global level. Some of the contributions build upon the analysis developed in the framework of the Made Real project, which was coordinated by the Odysseus Academic Network and co-financed by the European Commission.

The editors are very grateful to the Editor-in-Chief Vincent Chetail and his team at the RSQ for the opportunity to develop this issue and for an excellent collaboration during the editing process. They also thank Alice Bloomfield, Galina Cornelisse, Cathryn Costello, Alice Edwards, Petra Molnar, Minos Mouzourakis, Joanna Petin and Stephanie J. Silverman for contributing to the issue. 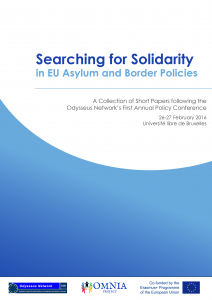 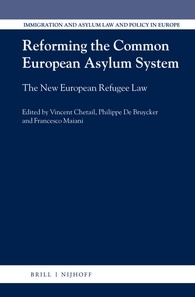 This book is aimed at analysing the recent changes of the Common European Asylum System, the progress achieved and the remaining flaws. The overall objective and key added value of this volume are to provide a comprehensive and critical account of the recast instruments governing asylum law and policy in the European Union.