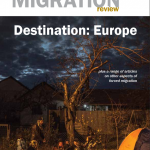 P. De Bruycker and E. Tsourdi discuss burden sharing in the January issue of Forced Migration Review (p. 64). According to the authors, the cycle of mutual mistrust between EU Member States that prevents solidarity can only be broken if responsibility is assessed fairly on the basis of objective indicators. To read more, click here.

It is a pleasure to announce that one of the Portuguese Members of the Network, Constança Urbano de Sousa, has been appointed Minister of Internal Administration in the Portuguese Government. In addition to working in academia and collaborating with the Odysseus Network for more than 10 years, Constança is also a great legal practitioner. She was a member […]