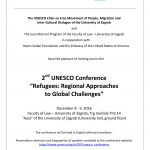 Iris Goldner Lang, Croatian Odysseus Member and UNESCO Chairholder at the University of Zagreb is organising the second UNESCO Conference ‘Refugees – Regional Approaches to Global Challenges’ coming up on 8 and 9 December in Zagreb. High-profile contributions will also be given by a number of members from the Odysseus Network, such as Philippe de […]

The November edition of the Odysseus Academic Network Newsletter has been published today. Topics covered include the upcoming Odysseus Annual Conference 2017 titled ‘Beyond ‘crisis’? The State of Immigration and Asylum Law and Policy in the EU’, the successful conclusion of the REDIAL Project, the 2017 Odysseus Summer School and a call for applications for […]

With Odysseus Members Erna Blöndal from Iceland and Jens Vedsted-Hansen from Denmark in the seminar’s organisation committee, this event is hosted by the University of Iceland Human Rights Institute and the Nordic Institute for Migration and Refugee Policy, in cooperation with the Icelandic Research Fund Centre of Excellence on Mobilities and Transnational Iceland. Call for Papers: […]

The Migration Policy Centre (MPC) presents a new Research Report within the framework of the REDIAL (Return Directive DIALogue) project, by Madalina Moraru and Geraldine Renaudiere: REDIAL electronic journal on judicial interaction and the EU return policy. Second edition : articles 12 to 14 of the Return Directive 2008/115

Violeta Moreno-Lax and (Queen Mary University London), participating in the OMNIA Project coordinated by the Odysseus Network, and Efthymios Papastavridis (Democritus University of Thrace, the Academy of Athens and Oxford University) are editors of an upcoming publication on ”Boat Refugees’ and Migrants at Sea: A Comprehensive Approach’. Please see the publisher’s website for further information on […]

On 29  November, the Centre of European Law of the Université libre de Bruxelles and the Odysseus Academic Network are hosting an ‘Apéro du Droit’ on L’Accord UE-Turquie, l’Externalisation de la Politique d’Immigration et d’Asile au Risque des Droits Fondamentaux. The event will include contributions by Rostane Mehdi (Director of the Institute of Political Studies at Sciences-Po, Aix), […]

The project HEAR: Hearing Entails Awareness and Rights aims to promote the application of the right to be heard of detained immigrants by raising understanding, awareness and knowledge in this area. The  project is led and authored by Valeria Ilareva, Bulgarian Member of the Odysseus Academic Network, and implemented by the Foundation for Access to […]