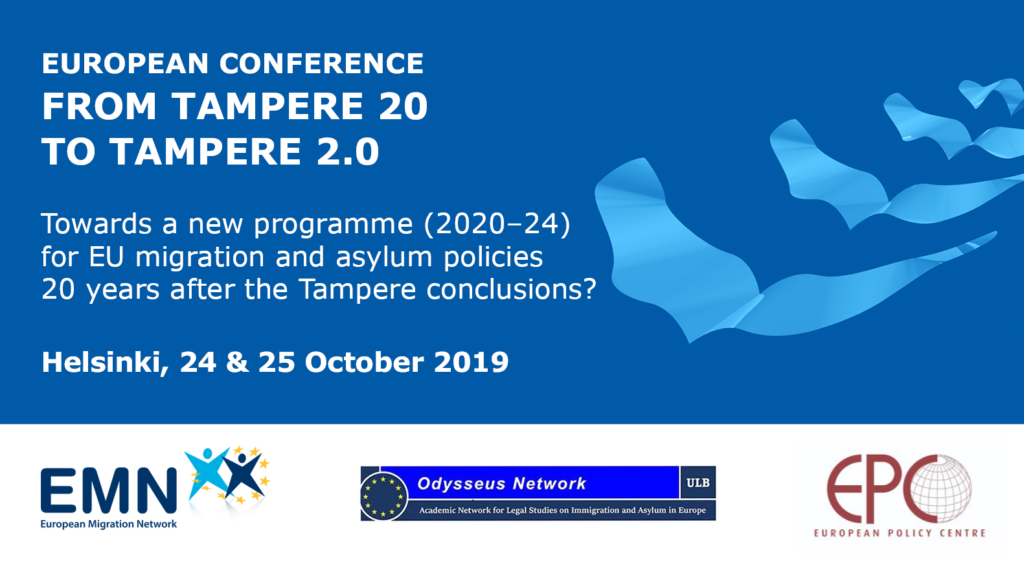 EMN Finland, the Odysseus Academic Network and the European Policy Centre (EPC) organise this event to provide ideas and suggestions for the five-year programme mentioned above. A call for contributions has been launched to fuel the five preparatory workshops in charge of drafting papers to be discussed at the conference. A final document will be presented after the conference to the EU institutions, and to the Member States for discussion. The conference follows the structure of the Tampere conclusions as following:

Workshops will leave ample time for a discussion with participants. High-level speakers, policy makers, stakeholders and academics from all over Europe will figure among the speakers.  High level speakers such as Director General of the IOM Antonio Vitorino, UN High Commissioner for Refugees Filippo Grandi, Executive Director of EASO Nina Gregori and ICMPD Director General Michael Spindelegger have confirmed their participation. High level representatives of EU institutions and Agencies, Member States, NGOs as well as leading academics will participate.

There will be a range of workshops attended by stakeholders and policy makers from Europe as well as other parts of the world to bring their diverse points of view to the table. Workshops will be introduced by top specialists in their field. The results of the conference will be shared widely including with the EU institutions and Member States who may take them into consideration in their further discussions.

In order to receive information and updates, you can confirm your interest by sending an email to tampere2.0conference@gmail.com.

In order to provide food for thought in the conference, the Odysseus Network, the EMN-Finland and the European Policy Centre (EPC) and the Friedrich Naumann Foundation launch a call for contributions. Five preparatory workshops gathering policy makers and stakeholders from all horizons and academia will be organised in Brussels in June 2019 to review the draft papers that will be discussed in the conference. The topics of these preparatory workshops follow the program of the conference (see the five workshops above), the human rights of migrants being a transversal concern: